Barclays bank JOBS Medicals 'were sex assaults' and If dR GORDON BATES was alive he would be prosecuted, sayS NORTHUMBRIA police.

Shaw and Co Solicitors has begun legal action for negligence against Barclays Bank on behalf of dozens of people inappropriately examined by Dr Gordon Bates.

The GP was hired by Barclays for health checks on teenage job seekers who had been offered work with the company in the 1970s and 80s. 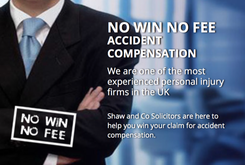 Personal Injury Claims In The News

We deal with many compensation claims as a result of slips,trips and falls.

The law is not straightforward in respect of these claims for compensation and the courts are notoriously inconsistent in the way that they deal with these cases.

The prospects of the compensation claim succeeding varies depending on a number of factors.

Personal Injury Claims In The News

Over the next 12 months there will be more news about changes to the Count Court thresholds for "Small Claims".

If a case is classed as a "Small Claim", people are encouraged to represent themselves and the court adopts a simplified approach to dealing with said cases.