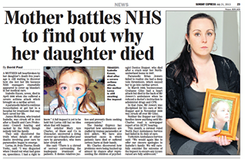 A mother left heartbroken by her daughter’s death five years ago is still waiting to discover how she lost her life because NHS managers shamefully appeared to cover up blunders in her medical care.

Izabelle Easen, seven, died in April 2008 when she suffered a severe asthma attack which brought on a cardiac arrest.

A paramedic failed to continue resuscitation or get her to a hospital for treatment that may have saved her life.

James McKenna, who treated Izabelle, was struck off in 2010 after a Health and Care Professions Council hearing and sacked by the NHS, though nobody told the family.

They only discovered the truth when details of other deaths involving poor care by paramedics began to emerge.

Lorna, 30, from Thorne, , said “I was disgusted when I found out what had gone on, speechless, I had a right to know”.  A full inquest is yet to be held but Lorna still has no idea when that will happen.

Her solicitor Mary Ann Charles, of Shaw and Co Solicitors in , uncovered a string of cover-ups of deaths after poor care by paramedics, who were later struck off.

She said “There is a shroud of secrecy surrounding the inadequate treatment of patients.  It denies relatives justice and prevents them seeking compensation”.

The Sunday Express has reported how ambulances are staffed by trainee paramedics or first aiders.  We have also unearthed cases in which patients have died or suffered serious harm at their hands.

In March 2008, businessman Grahame Giles had a heart attack but died in the back of Mr Jewer’s ambulance when he refused a doctor’s instruction to administer drugs and CPR.

In that June, Mr Jewers was disciplined for his care of Mrs Hopper and in November 2009 was struck off over Mr Giles.

Neither the Hopper nor Giles families knew anything until Ms Charles read a newspaper report of his HCPC hearing.

This month, a coroner ruled North East Ambulance Service had failed in its duty of care.

Yorkshire Ambulance Service said “We would again like to offer our sincere apologies to Izabelle’s family.  We will carefully consider the outcome of the inquest to ensure any issues raised are fully addressed”.