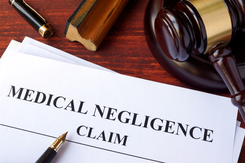 Two grieving children whose mother was misdiagnosed and mistreated by a paramedic won £40,000 compensation thanks to their sharp-eyed personal injury solicitor.

But more than two-and-a-half years later, painstaking inquiries by Shaw and Co Solicitors UK uncovered the truth - that she could have lived if given the right treatment.

The family’s solicitor Mary Ann Charles, of Shaw and Co Solicitors' Personal Injury team, found that health chiefs failed disclose the blunder, kept quiet about it at an inquest, and said nothing when the paramedic was later disciplined.

By the time the truth emerged, the same paramedic had been struck off over the death of another patient.

Mary Ann said the breakthrough came just six months before a time limit to sue the ambulance trust was due to expire, something she described as “a shocking and horrible state of affairs”.

Mrs Hopper died on Boxing Day 2007, but late in 2009 Mary Ann read an official report about the paramedic being struck off. She recognised him as being the health professional who treated Mrs Hopper, and began to investigate.

The dead woman’s son James said:  “It’s all come about only because our lawyer made the connection. There’s not a lot we can say which properly vocalises how grateful we are to her.

“The NHS people thought they could deal with it secretly and not tell us.”

His sister Kerry-Ann added: “If Mary Ann hadn’t spotted it we might never have known the truth”.

Mary Ann was originally engaged to examine the road accident near the family’s home in Northumberland.

Mrs Hopper spent a week in hospital recovering from her injuries, but days later developed breathing problems and died before reaching hospital. Mary Ann’s inquiries revealed not only that she had received inappropriate treatment but also that the paramedic was disciplined for the error.

In an out of court settlement, the North East Ambulance Service NHS Trust admitted that there was a failure to make a competent diagnosis, but did not admit liability for Mrs Hopper’s death.