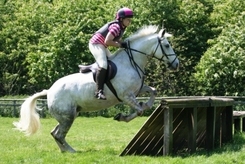 A horsewoman badly hurt when her mount was startled by an uncontrolled dog. Shaw and Co Solicitors UK recovered £30,000 in accident compensation for her horse riding accident.

The rider was exercising a friend’s horse along a country lane when the dog rushed at her from a nearby cottage.

The woman’s mount stumbled and fell so rapidly that its rider was still in the saddle - with her feet in the stirrups - when she hit the ground, causing multiple fractures.

Her solicitor Mary Anne Charles, a specialist equine solicitor, said dog owner’s insurance company agreed to settle out of court when faced with a strong claim.

“Our client was trotting along with no traffic about - there was no reason for her to expect that anything was going to happen,” she said.

“She had no warning that the dog would shoot out into the highway and startle the horse. She didn’t do anything wrong.”