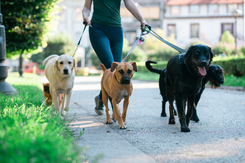 Many solicitors would have given up when their client’s £15,000 personal injury compensation award was withdrawn by the Court of Appeal.

But Mary Ann Charles, expert personal injury solicitor in Newcastle upon Tyne, instinctively felt something was wrong and - despite not having her costs paid - continued working on what appeared to be a lost cause.

She had taken the case when Shaw & Co Solicitors UK was engaged by an amateur athlete injured by a Great Dane.

Chartered surveyor Andrew Jones broke his ankle when Hector - a two-year-old 12-and-a-half stone hound - jumped up at him in a park in Leeds.

Mr Jones, out jogging in preparation for the London Marathon, was struck on the shoulder, sent tumbling down a slope, and badly smashed his ankle.

The animal’s owner, an RSPCA inspector, was held to be negligent after unleashing the dog, and was ordered by a County Court judge to pay compensation and costs.

However, the ruling was overturned the Court of Appeal when the owner’s legal team claimed that Hector was a rescue dog which had been badly treated as a puppy, giving him a tendency to run up to people, but that he had never attacked anyone before. The animal was described as being “of impeccable character”.

Said Mary Ann: “When we lost at appeal we came away very disappointed and miserable. I was so unhappy with it I decided to get a QC to look at it and review whether we could appeal - which would have meant the House of Lords”.

Because of the review and publicity surrounding the case, Shaw and Co Solicitors found that Hector was not an abused rescue dog but was a pedigree which had been sold by a reputable breeder to the RSPCA inspector.

Then Mary Ann made another breakthrough - finding out about a woman who also claimed to have been attacked by Hector.

She said: “We managed to find out about someone injured by the dog when it had done almost the same thing - it had been allowed out of the back of the RSPCA van, it bounded across the street, it jumped up at her and knocked her against the wall and had injured her arm. And she had received compensation for the injury”.

Shaw & Co Solicitors UK immediately began plans to return to the Court of Appeal on the basis that the court had been misled, and informed the dog’s owners.

Mary Ann said: “Ironically, the Court of Appeal decision is often relied upon as how the courts might treat animal cases and what the duties are of dog owners.

“But of course it isn’t a factually  true statement of what occurred because at the end of the day we did win and Mr Jones did get paid all of his dog accident compensation and all of the substantial costs were paid. This dog was just not the dog it was being held out to be.”